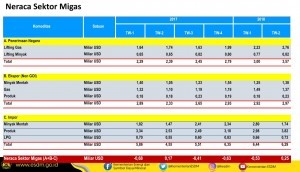 The Indonesian Government has announced it will not raise fuel price in the near future following the increase in state revenue in oil and gas sub-sector in the first semester this year.

The Government is not planning to raise fuel price in the near future, Minister of Energy and Mineral Resources (ESDM) Ignasius Jonan told reporters on Tuesday (4/9). According to him, until the first semester of 2018, the state revenue is higher than that in the same period in 2017.

State revenue in oil and gas sub-sector in the first semester this year is higher by around US$ 1,89 billion compared to that in the same period last year. We still have a surplus even after including diesel fuel subsidy, Jonan said.

In the meantime, Head of Communication for Public Information Services and Cooperation Bureau of Ministry of Energy and Mineral Resources Agung Pribadi added that the amount stated by Jonan is from oil and natural gas lifting.

In the first semester of 2018, state revenues from oil and gas sub-sector reached US$ 6.57 billion, while in the same period last year it stood at US$ 4.68 billion. The increase is around US$ 1.89 billion, or Rp28 trillion, Agung explained.

He added that diesel fuel subsidy was increased by Rp1,500 per liter, from Rp500 in 2017 to Rp2,000 per liter in 2018. Meanwhile, the distribution of diesel fuel until mid-2018 was 7.2 million KL (kilo liter), meaning that the subsidy amount is around Rp10.8 trillion, still lower than the state revenues increase at Rp28 trillion.

Even the Rp28 trillion can cover subsidies until the end of the year, in which the total solar quota is predicted to reach 14.5 kiloliters, Agung said.

Agung also expressed optimism that the oil and gas balance sheet will show a positive signal until end of this year.  Theres no need to raise fuel price, he added.

Furthermore, in order to control imports and boost foreign exchange as instructed by President Joko Jokowi Widodo, the Ministry has formulated several strategic policies, including rearrangement of electricity projects, the implementation of B20 mandatory policy, increasing the TKDN (Domestic Component Level), and implementing export policies on natural resources to increase foreign exchange.

We hope all of us can support the Governments policies to protect the country and the people, Agung concluded. (PR Division of Ministry of ESDM / ES ) (STU/EP/Naster)