No Hike in Fuel Price in Near Future, President Jokowi Says 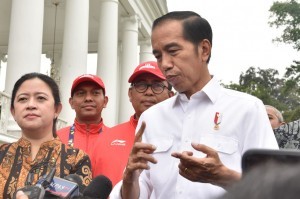 President Joko Jokowi Widodo said there will be no increase in fuel prices in the near future.

No, I’ve canceled it. It has been calculated, and the figures are very realistic, President Jokowi told the reporters after distributing cash bonuses to the 2018 Asian Para Games medalists at the Bogor Presidential Palace, West Java on Saturday (13/10).

According to the President, the Government had discussed the possibility of fuel price hike a month ago. The rise was planned in all types of fuel, including Premium, Pertamax, and DEX.

We decided to raise the price because the ICP (Indonesian Crude oil Price) and Brent prices also went up, the President said.

However, the President continued, there was a calculation of how inflation and purchasing power as well as the economic growth will affect the profit of Pertamina (state-owned oil and gas company) if the price remains raised.

Finally, President Jokowi admitted that he recalculated the price because the rise  would conflict with the interests of the people and reduce their purchasing power and consumption.

The President also explained that 56 percent of the current economic growth is still based on consumption. The Government is now trying to change it to production but it has not yet accomplished.

I received the latest report from Pertamina yesterday. The report shows how much Pertamina will get profit if the price is raised and I think the profit is not too significant. So, I have decided to cancel the premiums price rise, President Jokowi said.

Regarding the calculation of the price increase, President Jokowi suggested the reporters to ask this issue to Pertamina’s CEO. (UN/OJI/ES) (GWH/MMB/Naster)