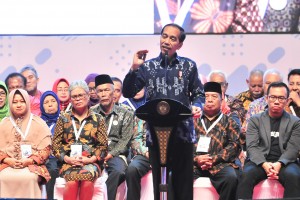 President Jokowi delivers a speech at the launching of Entrepreneurship for ASN and Pensioners, in Sentul, Bogor, West Java, Wednesday (16/1). (Photo by: Jay/Public Relations Division)

Pension funds should be carefully managed so as to bring benefits and improve welfare, President Joko Jokowi Widodo said.

The President made the statement in response to many State Civil Apparatus (ASN) who are worried ahead of their retirement despite allowances provided by the Government that is more than enough.

(No need to worry) as long as you can save and manage the pension money well and do not use it for consumptive uses President Jokowi in his remarks at the launching of Entrepreneurship for ASN and Retirees under the theme of Being Prosperous in the Post Service, at Sentul International Convention Center, Sentul, Bogor, West Java, Wednesday (16/1).

The President also advised state civil apparatuses who are about to retire and all retirees to begin entrepreneurship.

According to the President, starting a business is not easy; thus he advised them to choose businesses related to their expertise during their service. For example, a retiree from Ministry of Maritime Affairs and Fisheries can run a business relating to fish selling and its products. In addition, President Jokowi also advised them to run a low-risk business, for example, by selling items that are not rotten or stale, as well as a business whose added value would increase, such as setting up boarding houses.

Business in boarding houses would earn clear income every month or every year, then the added value of the building would definitely continue to increase every year. Say the building is initially priced at Rp500 million, now it would be Rp2 billion, the President said.

In starting running a business, President Jokowi also advised them to find partners whose business has already been in operation and who has same character. Business will run smooth if we have the right partners. We can learn business management, the President said, citing an example that his son is in collaboration with businessman in running his own business.

The President also reiterated that with more than 260 million people, Indonesia is a huge market; yet some products sold in Indonesia are still flooded with products from other countries.  I invite you to use our own products, the President concluded. (FID/JAY/ES)