No Need to Worry About Megathrust: BMKG Head 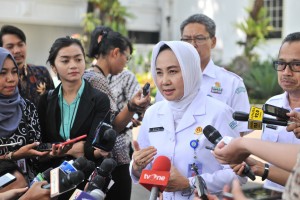 Potential for megathrust quake to happen in Indonesia is based on the results of studies and research, according to Head of the Meteorology, Climatology and Geophysics Agency (BMKG) Dwikorita Karnawati.

Potentials are different from predictions. The latter have a higher certainty, Dwikorita said after attending the Opening of BMKG National Coordination Meeting at the State Palace, Jakarta, Tuesday (23/7).

To date, science has not been able to reveal when megathrust quake will occur, Dwikorita explained.

Indonesia is a country vulnerable to earthquakes and the BMKG reported that as many as 5,000 quakes happen annually, with 300 quakes with a magnitude greater than 5.0 as the country lies on top of two major tectonic plates  the Eurasian and Indo-Australian plates  and several minor plates. The country is also surrounded by two oceanic tectonic plates, the Pacific and Philippine Sea plates.

Dwikorita went on to say that mitigation, anticipation, and adaptation are three aspects that must be taken into account in the face of megathrust quake. In addition, evacuation routes, assembly points, evacuation shelters, and spatial planning deserve attention to help mitigate potential impacts, she added.

The most important thing is that we have to educate ourselves and the community, regional government about disaster mitigation, Dwikorita said. (FID/JAY/ES)