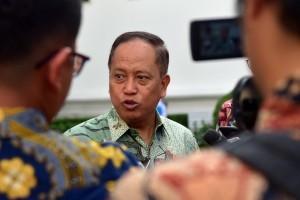 According to the prevailing laws, presidential and vice president candidates are not allowed to organize any political activities on campuses, Minister of Research, Technology and Higher Education M. Nasir has said.

Campus is a place for future academic development and to improve the quality of human resources. It is not a place for any political party campaigns, Nasir said to reporters after attending a plenary cabinet meeting at the State Palace, Jakarta, Tuesday (10/16).

Regarding the possibility of conflict between politics and academics, Nasir added that campus is clearly a place for academic purpose only, not for politics. Thus, he said, if a presidential or a vice president candidate goes to a campus, he must have a political reason and it is definitely prohibited.

Commenting on whether or not President Joko Jokowi Widodo is also prohibited to visit campuses, the Minister maintained that the Presidents visit to several universities is part of his role as Head of State, not as a presidential candidate. I always accompany the President (during campus visit) and I have never heard him launching a campaign as a presidential candidate, Nasir said.

However, he added that there is one special condition in which the candidates are allowed to visit campus, that is if the General Election Commission (KPU) requests them to come with the other candidates attend an event on a campus. Nasir cited an example in the United States, where the presidential and vice presidential candidates went to a  campus and hold a debate organized by the countrys election commission. This is what we need to understand, Nasir concluded. (FID / RAH / ES)