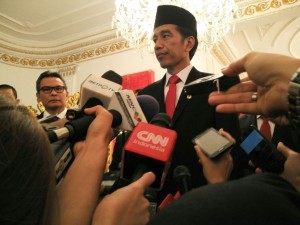 The President answered questions of journalists after the award ceremony of the National Hero title, at the State Palace, Jakarta, Wednesday (9/11) afternoon. (Photo: PR/Dindha)

In the midst of consolidation efforts with Islamic organizations aimed to calm things down following a rally in front of the State Palace, Jakarta, on Friday (4/11), rumor has it that there will be a replacement of the Indonesian National Defence Forces (TNI) Chief Gen. Gatot Nurmantyo.

However, President Joko Jokowi Widodo has denied the rumor. The President was even accompanied by TNI Chief Gen. Gatot Nurmantyo when giving his statement.

“Therefore, I invited the TNI Chief to assert that there was no such replacement,” the President said to reporters after the award ceremony of the National Hero title, at the State Palace, Jakarta, Wednesday (9/11) afternoon.

“I will order the Indonesian National Police (Polri) Chief to follow up the replacement issue. It is not true,  ” the President said.

Meanwhile, the TNI Chief Gen. Gatot Nurmantyo who accompanied the President on the occasion also denied the issue.

Gen. Gatot said that if there was any change of the TNI Commander to be done, then he must have been summoned beforehand by the President.

“It was the President who appointed me. Surely, if there was a change, then the President would have summoned me. There was no such thing. People are just making it up, so I can not comment anything,” Gen. Gatot affirmed.

When asked by journalists whether the issue is blown to heat the situation which is now under control, the TNI Chief did not argue, but also did not justify it. Gen. Gatot asks journalists to analyze it.

“I was with the President in the evening, and so was the next morning. Yesterday, I was at the Army Headquarters with the President, then had lunch with the President and the Polri Chief. Then there was a rumor that I would be replaced. Please analyzed it, if the information is untrue, then there must be a purpose behind it, right?” He concluded. (DID/BPMI /ES) (MUR/YM/Naster)