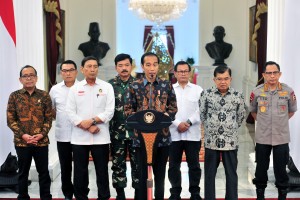 As head of state and head of government, President Joko Jokowi Widodo said he has an obligation to maintain political and security stability.

We will not give rooms for rioters who will harm the Unitary State of the Republic of Indonesia. The TNI (Indonesian National Defense Forces) and Polri (the Indonesian National Police) will take firm actions in accordance with the laws, President Jokowi said at a press statement at Merdeka Palace, Jakarta, Wednesday (22/5).

According to the President, the situation is still under control and the public should not be worry.

Regarding the post-election dispute, President Jokowi continued, the Constitution states that all disputes must be resolved through the Constitutional Court (MK). I appreciate Mr. Prabowo and Mr. Sandiaga (presidential contender pair in the last election) who brought the dispute to the MK. I also believe that the MKs ruling will be based on the facts, the President said.

Furthermore, President Jokowi also reminded that in the month of Ramadana month full of blessings and forgivenessit is a duty as Muslims to multiply good deeds.

I invite (all of you) to strengthen our unity, brotherhood, and harmony because Indonesia is our home, he said. (UN/JAY/ES)