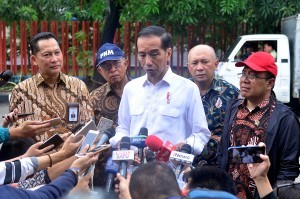 I have ordered the Kapolri to solve the case because this is intimidation against our law enforcers. We can’t tolerate this. Hunt down and find the perpetrators, the President told the journalists in Jakarta, Thursday (10/1).

President Jokowi added that security measures for investigators and commissioners of the KPK will be improved and the bomb attack will not hamper corruption eradication progress.