Not a Complicated Problem, President Jokowi Convinced that Forest Fires Can Be Solved 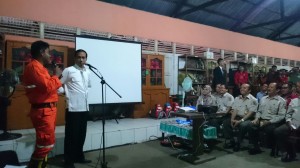 After inaugurating the Great Mosque of Mujahideen in Pontianak and laid the first stone in the construction of tertiary irrigation Landak District, West Kalimantan, President Joko Widodo (Jokowi) on the first day of his working visit to West Kalimantan, on Tuesday (20/1) evening, delivered a briefing to the anticipation of forest fires in Rasau Jaya Village, Kubu Raya District.

President Jokowi said, there are many organizations involved to overcome of forest fires. He mentioned that there are all organizations, from the Governor, Regional Commander (Pangdam), Indonesian Army (TNI), Regional Police (Polda) in charge Porles, plus Manggala Agni, and there is forest police also.

However, President Jokowi questioned this great organization cannot solve the problem of forest fires that have occurred for many years. “Is there something wrong? There is a will or not? That’s just the key, unwilling or unable in resolving this problem,” he said.

The President admitted that he was embarrassed by the international community because of forest fires that continue to occur here, as if to give the impression maintained. Often that airport cannot be used for landing and takeoff because of the smoke. The smoke also affects other countries. Gas emissions, has also become the calculation of the world.

“All there are the records. When Asian Summit, APEC, G-20 presented. If every year I have to get embarrassed like that, I do not want to. There must be responsible. Work it should be clear, there must be responsible,” President Jokowi said. To all parties involved in the prevention of forest fires, do not let it become a big fire. If there are hotspots and immediately pursued.

“I worked taking care of the fire is not one or two days. Moreover in the pine forest is more difficult. So I understand. I dare to speak because I understand,” Jokowi said. I am sure all those involved in the prevention of forest fires already know the tactics. “So it’s just a matter of will,” he said.

President Jokowi mentions, some areas are getting attention in the prevention of forest fires, i.e.: West Kalimantan, Riau, Jambi and South Sumatra, because in those areas are always worrying.

“Once again, I ask that this year will not happen again events such as last year, because of the fire led to the perception, image, people of the world, our neighbors, becomes a problem because of these fires,” President Jokowi said.

The President expressed his conviction, if we have the will together to resolve this problem it would be solved. According to the President, this issue appears in sight, so it is not something that is complicated and difficult to find.