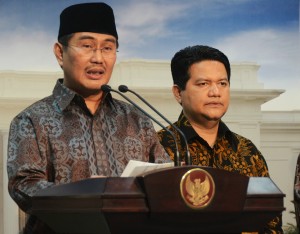 “We check this by using the TPD (Regional Investigation Team) as the case in the regions. So the cases are decreased. This could be due to the election points fewer in number, “Jimly told reporters after the joint committee KPU and Bawaslu received by President Joko Widodo, at the Presidential Office, Jakarta, Tuesday (3/11).

According to Jimly, the number of cases that the complaint are little, then, we are entitled to be optimistic that the implementation of this 2015 election can be successful. However, Jimly reminded, of course we cannot ignore that there are 75 cases being examined by DKPP, which on average with regard to the nomination stage, the dissatisfaction arising from the nomination process.

Regarding the lack of splendor in the organization of simultaneous elections that only a one month away, the Chairman DKPP, Jimly Asshidiqi admit that this is an important thing we are pleased to be noted that not too frenzied, but we also need to maintain a democratic election activities.

“On one side it should be controlled, however, on the other side the nuance does not disappear,” Jimly said.

Therefore, Jimly claimed to have submitted to the government to take responsibility, so that announcements and banners in every government office. “Not to sell the candidate but to increase voter participation,” he said (UN/AGG/ES)/Sy.