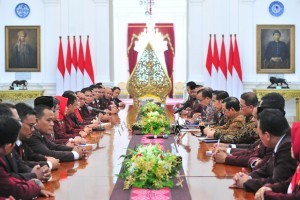 The Executive Board of the Indonesian National Nurses Association (DPP PPNI) praised the issuance of Government Regulation (PP) Number 49 of 2018 on Management of Contract-Based Government Employees (PPPK) and expressed hope that the new regulation can affect the nurses, particularly the non-tenured nurses.

“We propose the increase of State Civil Apparatus (ASN) quota, both civil servants (PNS) and PPPK as well as the appointment of non-tenured nurses -who have worked before 2005- as the ASN,” Chairman of the PPNI Harif Fadillah told the journalists after a meeting with President Joko Jokowi Widodo at Merdeka Palace, Jakarta, Tuesday (4/12).

In the meantime, Harif said that the PPNI supports the Governments programs in frame of Nawacita (nine priority programs of Jokowi-JK Administration) which focuses on disease prevention and health promotion to accelerate the improvement of public health. He added that the PPNI also proposed one village one nurse program to support the availability of nurses, improve their competence, and ensure the distribution of nurse practitioners in Indonesia.

“The Village Fund can be instrument to support the distribution of nurse practitioners in the village,” Harif said, adding that the one village one nurse program aims to accelerate public health improvement by empowering the nurse practitioners.

“The most important thing is the political will from the Government to make use of the available instrument, Harif said, adding that the proposal is under consideration.

Accompanying the President during the meeting were, among others, Minister of State Secretary Pratikno and Cabinet Secretary Pramono Anung. (FID/JAY/ES)