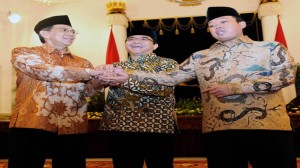 The Head of the National Agency for the Placement and Protection of Indonesian Migrant Workers (BNP2TKI) Nusron Wahid said that under his leadership, BNP2TKI will build early detection system to strengthen protection for Indonesian migrant workers.

So far, we often act hastily, taken by surprised if Indonesian migrant workers face problems, while the problems mustve been anticipated long before, Nusron told journalists after being inaugurated by President Joko Widodo (Jokowi) in the State Palace Jakarta on Thursday afternoon (27/11).

Nusron stated that the early detection system can be used to monitor quickly the day-to-day conditions of Indonesian migrant workers who work overseas.

Nusron also expressed his wishes that Indonesian migrant workers who have come home to their hometowns will never work overseas again. Instead, they are expected to work at home as entrepreneurs, or work in formal sectors, or adopt the technology and the working cultures in the places where they had worked previously, to advance this country and its people.

Meanwhile, the Head of the Investment Coordinating Board (BKPM) Franky Sibarani said that under his leadership, BKPM will endeavor to integrate permit systems for investment.

Permit systems should be integrated not only between the ministries and the state institutions in the central government but also between the central government and the regional governments. I believe that the focus of investment will be focused very much on the regions, Franky said to journalists after being inaugurated as the Head of the Investment Coordinating Board (BKPM) by President Jokowi in the State Palace Jakarta on Thursday afternoon (27/11).

Now, its the time for us to transform the construction permits into one stop service, as President has directed us. For that reason, BKPM will play the roles in accelerating and simplifying its processes and making the processes more transparent and integrated, Franky explained. (Humas Setkab/ES)