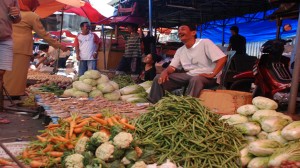 The Central Statistics Agency (BPS) reported on Monday (1/12) that trade balance of October 2014 generated a surplus of USD 23.2 million. Meanwhile, inflation after the increase of fuel oil prices in November 2014 stands at 1.5 percent.

Head of BPS Suryamin stated that the surplus of trade balance of October 2014 derived from total exports which reached USD 15.35 billion and total imports USD 15.33 billion.

Head of the Central Statistics Agency (BPS) Suryamin also reported that inflation pressure in November 2014 reached 1.5 percent, much higher than that of the previous month which reached only 0.47 percent. Inflation rate in November 2014 is relatively different from the inflation rate in June 2013 which reached 3.2 percent at the time the price of subsidized fuel oil increased. It indicates that the timing for implementing the policies on subsidized fuel oil price increase is quite right.

Furthermore, Suryamin stated that all cities in Indonesia face inflation because the subsidized fuel oil price increase impacts almost everything. The highest inflation occurs in Padang which reaches 3.44 percent and the lowest one occurs in Manokwari 0.07 percent.

In November 2014, inflation from food substances is high enough, reaching 2.15 percent, and on calendar year basis 7.12 percent and on year-on-year basis almost 8 percent. Therefore, we must pay special attention to food commodities, he stated.

Transportation includes the tariffs. Therefore, inflation from transportation, communication, and financial services in November 2014 reaches 4.29 percent. This inflation will keep going ahead, like public transportation charges, and the Government must control this, Suryamin stated.

Suryamin added that the core components are still under control at 0.4 percent, but government-controlled prices 4.20 percent. Then the food commodity group like rice and chili is also relatively high, the prices fluctuate as much as 2.37 percent, and the inflation from energy group reaches 6.27 percent.