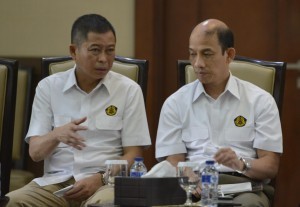 Although the figure for energy subsidies has increased following rising global oil prices, Minister of Energy and Mineral Resources Ignasius Jonan estimates that state revenues from the oil and gas sector will increase. Even, the country’s balance sheet is predicted to experience a surplus of Rp91.4 trillion.

This surplus projection is derived from the difference in revenues from energy and mineral resources sector compared to energy subsidies which are now also soaring far more than those set in the 2018 State Budget.

“Actually, in the State Budget, the surplus of oil and gas and mineral and coal mining revenues compared to energy subsidies are estimated at Rp62.1 trillion. Now, the surplus outlook increases by around 50 percent to around Rp91.4 trillion,” Jonan said at a press conference at the Ministrys office in Jakarta, Monday (17/9).

Jonan went on to explain that based on the current projection, revenues from the oil and gas and mineral and coal mining sectors until the end of the year are estimated at Rp240.3 trillion or higher than the 2018 State Budget target set at Rp156.7 trillion.

Meanwhile, total energy subsidies in 2018 are projected at Rp148.9 trillion, or increase from the 2018 State Budget of Rp94.6 trillion.

“The set figure in the State Budget was at Rp94.6 trillion, apparently the outlook is Rp149 trillion. So, it increases by almost 60 percent,” Jonan explained.

According to the Minister, the increase in energy subsidies is inseparable from the rising global oil prices and to avoid rising fuel prices so that peoples purchasing power is maintained.

“Global oil prices have risen, so subsidies must be adjusted. Otherwise, retail price of fuel will increase,” Jonan said.

Regarding data that shows the oil and gas trade balance experiences a deficit, Jonan does not dismiss it. “The trade balance must be minus because the price of oil imports is high and exports are also high. However, based on the value, it is definitely lost. Indonesias Crude Price is in line with the State Budget assumption in early 2018 of USD48 per barrel. Now it’s around USD70 per barrel,” Jonan added.

In addition, Deputy Minister Arcandra Tahar revealed the factors behind the condition of the oil and gas trade balance, mainly the decline in oil and gas exports.

“Exports dropped because there are blocks that were previously owned by foreigners, now they are Pertaminas. Second, there is a decrease in production of 30,000 barrels per day. Imports should have dropped, but the increase in imports is owing to rising economic activities,” Arcandra explained.

In general, the increase in revenue projection was due to rising commodity prices, especially oil and mineral and coal mining, Jonan concluded. (Public Relations of Ministry of Energy and Mineral Resources/ES) (MUR/MMB/YM/Naster).