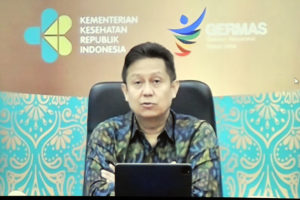 Although COVID-19 daily confirmed cases in six provinces have exceeded the peak of Delta variant, the Government has managed to keep Bed Occupancy Rate (BOR) under control, Minister of Health Budi Gunadi Sadikin has said.

“There are six provinces and 37 regencies/municipalities that exceeded (COVID-19 confirmed cases) the peak of Delta variant. The provinces are Jakarta, Banten, West Java, Bali, West Nusa Tenggara, and Papua. Meanwhile, BOR in those six provinces is mostly at around 30 percent compared to that of the peak of Delta,” the Minister said in a press statement after joining a limited meeting on the evaluation of public activity restrictions (PPKM), Monday (02/14).

However, he added, the provinces of Greater Jakarta and Bali have seen a surge in BOR level which were within a range of 40 to 50 percent. Nevertheless, confirmed cases in those two provinces are projected to decline in the upcoming weeks.

The Minister told the public that the highly transmissible Omicron variant indeed infected more people than Delta variant, yet it has lower hospitalization rate than that of Delta variant. The number of hospital beds specifically converted to treat COVID-19 patients is also lower compared to that of the peak of Delta.

On that occasion, Budi announced that telemedicine services for COVID-19 patients will soon be available to those living outside the islands of Java and Bali.

“We have been providing telemedicine services to 350,000 people and providing medicines to 100,000 people. Based on a directive from Coordinating Minister for Economic Affairs, the services will also be available in regions outside Java and Bali this week,” he said.

The Minister also reminded the public about the importance of vaccination and urged them to receive their shots including booster shot.