On AstraZeneca Vaccine Arrival, Foreign Minister: It is Outcome of Multilateral Cooperation 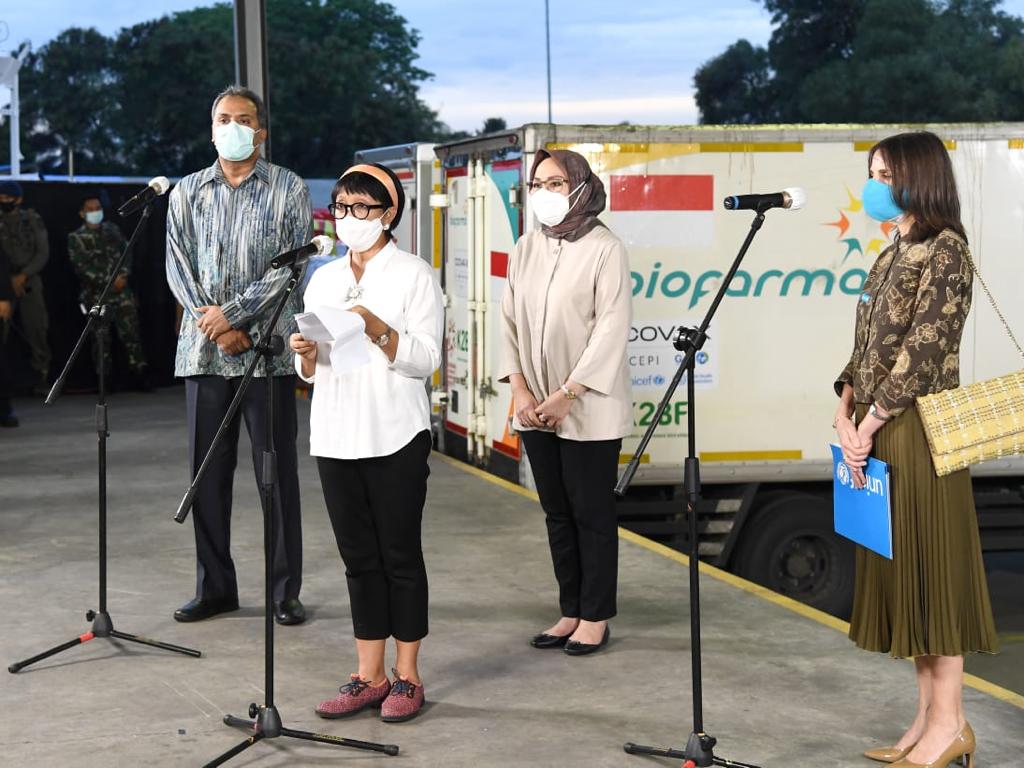 The vaccine was obtained through COVAX Facility multilateral cooperation.

According to Retno, the 1.1 million doses are the start of the first batch that Indonesia obtained under this multilateral scheme.

In the first batch, Indonesia will receive 11,704,800 (doses of) ready-to-use vaccine. The delivery of the first batch is going to be carried out until May this year and God willing, it will be followed with the next batches according to plan, Retno stated.

Retno went on to say that the vaccine arrival cannot be separated from the cooperation among related ministries and agencies in Indonesia, as well as many international parties, namely donor countries, GAVI Vaccine Alliance, World Health Organization (WHO), the United Nations International Childrens Emergency Fund (UNICEF), the Coalition for Epidemic Preparedness Innovations, etc.

Therefore, we would like to express our highest appreciation for all the cooperation, she remarked, adding that the Governments effort to procure COVID-19 vaccines through a multilateral path has been carried out since last year.

16 October 2021 in Geneva, along with Minister of State-Owned Enterprises, I delivered the Indonesian Governments Expression of Interest Letter to GAVI COVAX Facility. The letter was signed by Minister of Foreign Affairs and Minister of Health of the Republic of Indonesia. Since then, the process to obtain access to vaccines through a multilateral path has continued, she said.

On that occasion, Retno also expressed the Governments commitment to continuing to strengthen and reinforce vaccine diplomacy to build health resilience and to rebuild national economy.

“We will continue to strengthen vaccine diplomacy. Diplomacy will also continue to be reinforced to support the Governments efforts to build health resilience and recover the economy, she said, while stressing that Indonesia carries on supporting equal access to COVID-19 vaccine for all countries.

Besides striving to secure domestic necessities, Indonesias support on the principle of equal access to vaccine for all continues. We must keep voicing this principle, she asserted.

Retno added that the principle will be echoed by Indonesia through the role of Minister of Foreign Affairs as a co-chair of multilateral vaccine cooperation program COVAX Advance Market Commitment Engagement Group (COVAX-AMC EG).

Minister of Foreign Affairs of the Republic of Indonesia leads this cooperation with two other co-chairs, namely Minister of Health of Ethiopia Lia Tadesse representing AMC countries and Minister of International Development of Canada Carina Gould representing donor countries.

COVAX Facility has a target to procure vaccines for 20 percent of the population of each AMC country and to support the preparedness of AMC countries to execute national vaccination plans. (DND/UN) (DH/EP)