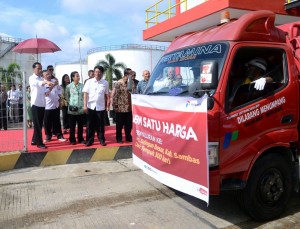 Indonesias geographical condition that consists of many islands with infrastructure condition that is not equally adequate poses challenges in in the distribution of fuel. Consequently, many people outside Java Island cannot purchase fuel at same price as that in Java Island. Nevertheless, such condition must be put to an end.

Since President Joko Jokowi Widodo and Vice President Jusuf Kalla took office, the Government has endeavored to apply a uniform fuel price in all regions all over the country.

Previously, the issue disparity of fuel prices among a number of regions was often ignored, so often times commodity prices in several regions can be much higher than prices in other regions and this condition is certainly against the fifth principle of Pancasila, Indonesias state ideology.

This is what I often say: that we have not paid attention to social justice for the whole Indonesian people, the President said during the inauguration of One-Price Fuel program in Pontianak, West Kalimantan, Friday (29/12).

President Jokowi added that the one-price fuel program is the answer to the problem. Nevertheless, when the program was initially implemented, the President added, many people had doubt in the continuation of the program and the President also acknowledged that at a glance this policy was too difficult to implement, especially considering budget needed for its implementation.

Nevertheless, President Jokowi added, anything must be done to bring social justice for the whole Indonesian people.

I have instructed Minister of State-owned Enterprises and Minister of Energy and Mineral Resources to calculate exact additional costs needed for the program. It turns out that its around Rp800 billion. Previously, fuel subsidy could reach Rp300 trillion, so why cant we provide Rp1 trillion for this program? This is why I decided that this one-price fuel program is a must,  the President said.

So far, Papua has often been made as an example of a region that suffers from fuel price disparity.  However, besides Papua, it turns out that many other regions also suffer from the same problem. In the islands of Kalimantan and Sulawesi for example, fuel price in these two islands can be six times higher that the price in Java island.

In border areas such as in Kapuas Hulu for example, fuel price can be at Rp40,000 per liter. If you dont believe it, please come to Puring Kencana district in Kapuas Hulu regency, the President said.

Therefore, during the recent working visit to West Kalimantan, President Jokowi simultaneously inaugurates the One-Price Fuel Program in Kalimantan as well as in some other regions and the President said it would be followed by equal infrastructure development so that fuel supply distribution can easier.

I would like to thank all officials and staffs of state-owned oil and gas company PT. Pertamina and the private sector for their hard work in implementing One-Price Fuel Program and fuel price that creates social justice. By saying, bismillahirrahmanirrahim, I inaugurate simultaneously One-Price Fuel program in17 regions, the President said, as quoted in the press release of Deputy for Protocol Press and Media of Presidential Secretariat Bey Machmudin.