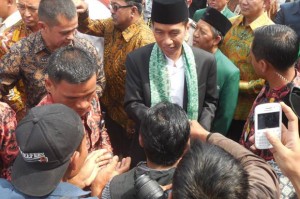 President Jokowi while attending the 19th congress and in commemoration of 100 years of Mathla’ul Anwar, in Pandeglang, Banten, on Saturday (8/8).

In his remarks, President Jokowi stated that Mathla’ul Anwar, which was established by KH M Yasin, KH Tb M Sholeh, KH Mas Abdurrahman and some other scholars in Menes-Pandeglang 100 years ago, has two foundations, namely Social and Cultural. He also believed that the two foundations can be used for succeed the development programs in the country.

Therefore, the President asked the two legacy, able to be used as stepping Mathla’ul Anwar in educate the nation, as a commitment in continuing the struggle and exemplary of the ancestors and founders to continue to struggle in the proselytizing, social and education.

President Jokowi also hoped, various educational institutions under the auspices of Mathla’ul Anwar, able to harmonize between religious understanding and general science, to support community development in various economic activities and the implementation of a tolerant Islam, moderate, upholding the diversity, keep Indonesia and refuse violence in the name of religion.

“Jemaah Mathla’ul Anwar are quite numerous and scattered in different provinces must also continue to fight for Islamic values that keep to the Indonesian-ness and uphold human values and refuse all forms of radicalism in the name of religion,” Jokowi message.

All capabilities of Mathla’ul Anwar, believed, could be applied significantly in overcoming the various problems we face, in order to strengthen our identity as a religious community, polite, capable and dignified, as the embodiment of Islam rahmatan lil Alamin to get to the structure of Baldatun Thoyyibatun wa Robbun Ghofur.

The Head of State admitted very appreciated the gait Mathla’ul Anwar over the years, especially in the fields of education, proselytizing, and social. The President hoped that the alumni who had been educated in Mathla’ul Anwar could also have a mission to contribute to the successful development of entrepreneurial spirit.

“We want more and more alumni of Mathla’ul Anwar, that was able to successful economic activity,” the Head of State said.

Previously at the beginning of his speech, President Jokowi expressed that he had received a batik turban typical of Banten, General Chairman of the Executive Board of the Mathla’ul Anwar KH Ahmad Karim Sadeli. “Kiai give me a special turban. He whispered to me, Mr. President, this original batik of Banten,” he said.