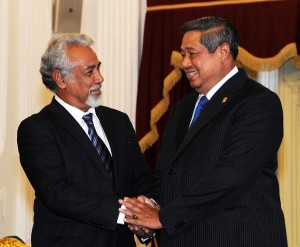 Presidential Special Staffer for International Relations Teuku Faizasyah in his press conference on Thursday (9/10) stated that BDF VII will start with leaders session which is led together by President SBY and the Philippines President Benigno Simeon Aquino III who will act as the co-chair.

In addition to opening BDF VII on Friday (10/10), President SBY will also lead the first session discussion which will be held after the opening ceremony.

Those stars are the highest awards which Indonesian government can confer on foreign citizens, Faizasyah said.

Since 2008 or the time when BDF was initiated, several heads of states and heads of governments have participated in BDF as the co-chairs. They came from Australia, Japan, South Korea, and Bangladesh.

Meanwhile, several heads of delegations from many countries had the opportunities to participate in the High Level Sessions. They came from, among others, Australia, South Korea, Afghanistan, East Timor, Brunei Darussalam, Turkey, Thailand, Papua New Guinea, the Philippines, Iran, Qatar, Sri Lanka, Singapore, and Nepal.

In the series of BDF sessions, the participants will share their best practices and their experiences in promoting their respective homegrown democracy.

Great interest in BDF from many other governments coming from various regions grows significantly. In 2013, there were 86 member countries and observing countries which participated in BDF. This shows clearly that many governments coming from various regions trust BDFs approach to promoting the virtues of homegrown democracy, Faizasyah concluded. (SKPHI/ES)