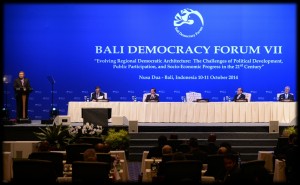 President Susilo Bambang Yudhoyono (SBY) reaffirmed his stance that he opposed the Pilkada Act (the Act of Regional Head Election) stipulated by the plenary meeting of House of Representatives RI on September 26, 2014. For that reason, he issued the Government Regulation in Lieu of a Law to revoke that Pilkada Act.

I oppose the new law because it is a backward step for Indonesian democracy, particularly since we have fought so hard to institutionalize the direct election, President SBY said it while opening the Bali Democracy Forum (BDF) VII in Bali International Convention Center (BICC), Nusa Dua, Bali, on Friday (10/10).

In the event attended by President of the Philippines Benigno Aquino II, Prime Minister Timor Leste Xanana Gusmao and Sultan of Brunei Darussalam Hassanah Bolkiah, President SBY revealed that since 2009, it has been more than 500 Governors, District Heads, and Mayors in Indonesia who were elected directly by the people.

The practice of direct election has caused so many prohibitions and manipulations, and also the appearance of candidates with abilities that were questioned. According to President SBY, the answer was not by revoking that direct election but by reforming the system therefore the voters could have information for better leaders and could help to minimize cheats on the public election.

For that reason, by considering the peoples will, President SBY has issued the Government Regulation in Lieu of a Law.

President affirmed that the end of reformation is to make democracy that fulfill the peoples need, not the narrow interest from some elites.

President SBY also said that since the reform era in 1998, Indonesian democracy has been growing and developing well. As a man who always believes in democracy, President SBY was very proud to take part in democracy transformation as a general, a politician, and the sixth Indonesian president.

Our democracy is the on going work and although we have attained many things but the great challenge awaits us in the future. If we can solve this challenge, our democracy will be stronger, SBY uttered.

President SBY believed that although we still have the challenges which are noisy sometimes, the excessive freedom and colored by black campaign, the Indonesian democracy will continue to develop. I am sure that these challenges will able to be solved, President SBY said.

BDF VII was opened by leaders session, chaired together (co-chairs) by President SBY and President of the Philippines, Benigno Simeon Aquino III. In addition, there were two other head of states which are Sultan of Brunei Darussalam Sultan Hassanal Bolkiah; PM of Timor Leste Kay Rala Xanana Gusmao; some ministers; head of delegations from 54 participant countries and several observer countries. (Humas Setkab/ES)