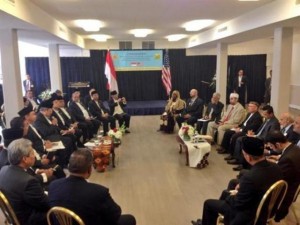 Indonesian Mosque in Washington DC is initiative from number of people coordinated by Indonesian Muslim Association of America (IMAAM). The mosque stood on a land of 11,300 square meters, purchased in June 2014 for IMAAM, aimed for centre of Islamic activities. IMAAM is a non-profit organization based in Silver Spring Maryland and has 500 members of family since 1993.

President SBY asks the board of IMAAM that the mosque to be fully utilized for opening friendship and dialogue with various parties, both intern Islamic and outside Islam.

A Concern With The Escalated Conflicts

In his speech, President SBY expresses concern on proliferation of conflicts, whether it intern Muslim and Muslim with others, especially conflict that happens in Middle East should be ended immediately. What is in my mind is that we should end violence, there should be comprehensive solution that is wise to handle, said President.

According to President SBY, the difference between Islam and west needs to be found its solution. Similarly, the violence has to be gradually reduced because those take unnecessary casualties.

Violence that still happens has to be stopped before we all regret, there is way to be taken, said SBY firmly then asks Muslim in the world to end violence through soft-power and smart-power approach.

In front of all ministers, President SBY explains that after speech at United Nation (UN) in New York, he explained about how to do something big in the world so that the distance between conflicting parties not widened. After opening the mosque, President and delegation fulfill Friday prayer. After that, President held a meeting with Muslim leaders in United States and engage in dialogue.