Overcome the Weakening of Rupiah, President Jokowi Invites the Public to Buy the Local Products 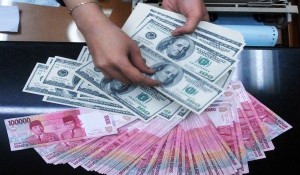 Overcome the Weakening of Rupiah, President Jokowi Invites the Public to Buy the Local Products

The weakening of the rupiah exchange rate that has exceeded USD 14,000 per US dollar since Monday (24/8) assessed by the President Joko Widodo (Jokowi) is out of the ordinary. For this reason, President Jokowi invites businessmen to the Presidential Palace in Bogor, West Java, on Monday (24/8), to make a breakthrough.

“The weakening of the rupiah has been out of the ordinary. Yesterday I invited the businessmen and the government to do a breakthrough,” President Jokowi said through his twitter account @Jokowi uploaded on Tuesday (25/8).

Related with the weakening of the rupiah, President Joko Widodo invite all all levels of society to work together to overcome it.

“Let’s work together to overcome the weakening of rupiah by way of purchase of local products,” Jokowi wrote in his Twitter account.

Previously, after attending limited cabinet meeting chaired by President Jokowi, which was attended by about 25 leading national businessmen, Coordinating Minister for Economy Darmin Nasution said give accurate advice in dealing with weakening of rupiah turmoil, which has now been exceeded Rp. 14,000.00 per US dollar.

“Actually, the only accurate answer is not to follow the rhythm but take the position of his opponent,” Darmin said at the Presidential Palace in Bogor, West Java, on Monday (24/8).

According to the Coordinating Minister for Economy, the first thing to do is to increase government spending, especially capital expenditure, because capital spending is still about 20s percent to this day.

Second, continued the former Governor of Bank Indonesia (BI), is to encourage investment.

In order to encourage investment, according to Nasution, not just invite investors in the country and abroad, the president said it will conduct large-scale deregulation in every department. This is done in order that the investment can be more smoothly and the economy could move, not just drift following the economic slowdown. (ES)