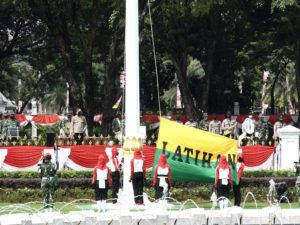 A rehearsal for flag-hoisting ceremony to observe the proclamation of the Indonesia’s independence is held at the Merdeka Palace, Jakarta, Saturday (14/8). (Photo by: Presidential Secretariat/ Rusman)

Presidential Palace Saturday (14/8) conducted a rehearsal for flag-hoisting ceremony to observe the proclamation of the Indonesia’s independence.

The ceremony is set to be held at Merdeka Palace in compliance with strict health protocols amid COVID-19 pandemic.

The event began with an entrance simulation of the ceremony squad consisting of members of the Army, Navy, the Air Force, and the Police as well as other ceremony squad. Afterwards, it was continued with the simulation on the entrance of the President, the First Lady, the Vice President and his wife to the venue.

The rehearsal was followed with the fire of cannon to mark the momentous proclamation of the Indonesia’s independence, the flag-raising ceremony, and the closing of the ceremony.

For the record, it was the second rehearsal conducted by the Presidential Palace after the first one which was held a day before. (PRESIDENTIAL SECRETARIAT/UN) (RAS/EP)