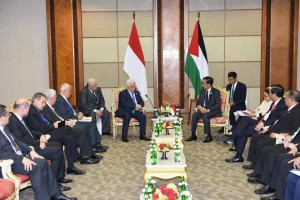 Bilateral Meeting of President Joko Widodo and President of Palestine at JCC, Jakarta (6/3)

Indonesia is always committed to give full support to the independence of Palestine. Indonesia will also fully support the initiatives and breakthroughs of Palestine to hold an international conference.

This view was delivered by President Joko Widodo after a bilateral meeting with President of Palestine Mahmoud Abbas at Kakatua Room, Jakarta Convention Center, Sunday (6/3) evening.

Indonesia hopes the results of this Summit could be a concrete inputs for the next conferences mechanism, the President said while emphasizing that Indonesia will always participate in Palestines independence.

On that meeting, as conveyed by President Joko Widodo, President Mahmoud Abbas thanked Indonesia for the organization of the 5th OIC Extraordinary Summit in Jakarta, from 6 to 7 March 2016, that mainly discuss Palestine and Al-Quds Al-Sharif.

(President Mahmoud Abbas) thanked Indonesia for the organization of this Summit as well as Indonesias consistency in fully supporting the Palestine, President Joko Widodo said.

The meeting also discussed a number of issued related with borders, informal settlements, and Palestinian refugees who are staying outside Palestine, as well as security issues at the zones occupied by Israel.