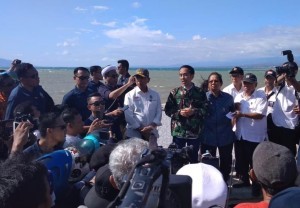 President Joko Jokowi Widodo on Sunday (30/9) led a limited meeting on the measures to tackle the impacts of the earthquake and the tsunami that hit capital Palu and several other areas in Central Sulawesi province.

The President also instructed the Indonesian National Defense Forces (TNI) personnel to work hard in evacuation stage. I order you to work hard during the evacuation process, he said.

In addition, the President also instructed TNI personnel to assist rehabilitation and reconstruction process in the disaster areas. We must work together – the Indonesian national police, ministries, institutions, and communities – to immediately tackle the impacts of the disasters in Central Sulawesi Province, he said.

During the visit to the province, President Jokowi is also scheduled to inspect a number of locations affected by the deadly disasters. The first location was Balaroa housing complex, where President Jokowi handed over relief aids and inspected the rubble and evacuation centers.

The President also visited Talise Beach, which is the main tourist spot in Palu and one of the areas in the city was that was badly affected by the tsunami, Undata Hospital and an evacuation shelter in Vatulemo Square. (BPMI/EN) (STU/EP/Naster)