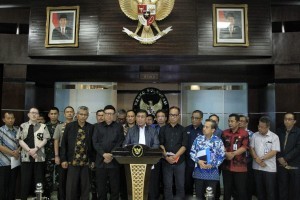 In the meantime, Commander of the Indonesian National Defense Forces (TNI) Marshal Hadi Tjahjanto, Minister of Communication and Informatics Rudiantara, Minister of Social Affairs Agus Gumiwang Kartasasmita, Deputy Chief of the Indonesian National Police (Polri) Commissioner General Ari Dono and Head of the National Search and Rescue Agency (Basarnas) Henry Bambang Soelistyo returned to Jakarta via Hasanuddin Airport after spending 6 hours inspecting the disaster area and coordinating with local government, according to Acting Head of the Public Relations Bureau of the Ministry of Communication and Informatics Ferdinandus Setu in his press release on Saturday (29/9).

In the coordination meeting, Coordinating Minister Wiranto asserted that the funeral of the victims shall be conducted properly and immediately after their identity can be identified by the Disaster Victim Identification (DVI) team through face recognition and fingerprints. Wiranto also said that the evacuation for the unfound victims shall be continued.

The logistics for the humanitarian assistance, according to Wiranto, will be transported from Makassar to Palu using Hercules Aircraft. He has also instructed Ministry of Social Affairs to immediately build a Meal Center in 10 refugee camps and instructed Ministry of Communication and Informatics to restore the telecommunication in Central Sulawesi.

Previously during the coordination meeting at the office of Coordinating Ministry for Political, Legal and Security Affairs, Wiranto also mentioned the importance of restoring communication in disaster-affected areas.

“Cellular communication will be restored immediately. We also try to communicate via satellite. The BNPB and the Ministry of Communication and Informatics will also support the measure tomorrow morning, “Wiranto said.