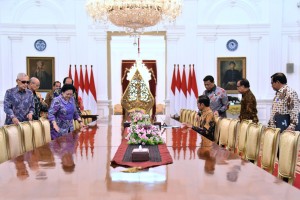 President Jokowi accompanied by a number of ministers receives the BPIP Steering Committee, at the Merdeka Palace, Jakarta, Thursday (9/5). (Photo by: OJI/PR)

After the elections, this nation is rather divided. We should anticipate it. Dont let this nation be divided by politics. It is very dangerous, member of the committee Syafii Maarif told reporter after the one-hour meeting with the President at the Merdeka Palace, Jakarta, Thursday (9/5).

The meeting, Syafii added, was also aimed to report on the performance of the BPIP Steering Committee which should be conducted once every three months.

The Steering Committee also suggested the Government to refer to the law, stating that the elected president is the President for all Indonesian people.

This is a very important matter since it will become a great loss for us if the nation is divided. The future will be unclear when it happens, Syafii Maarif stated, adding that the national integrity must be properly maintained.

In the meantime, another member of the committee Mahfud MD, conveyed hope that the elected president will improve the election administration laws in the first year of the implementation of the National Legislation Program. According to him, this is to prevent the last elections woes which inflicted casualties and others.

(The next elections) must be anticipated and prepared, including presidential threshold requirement and the election system. We should discuss it in the first year (of the elected presidents administration) so the discussion will be finished in the second year. If there is a need for judicial review, it can be conducted in the third year; thus, in the fourth year, all (problems related to the election administration) will be solved, he said.