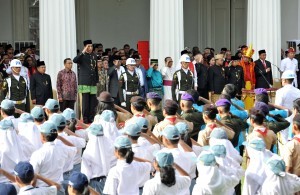 President Jokowi attends the ceremony commemorating the Founding of Pancasila, at the Ministry of Foreign Affais, Jakarta, on Thursday (1/6)

President Joko Jokowi Widodo asserted that diversity is inherent to our society. It is God’s destiny for Indonesia.

We are diversity from Sabang to Merauke, from Miangas to Rote. Various etnics, native languages, local customs, religions, faiths, and groups have united in creating Indonesia.

That is our Bhinneka Tunggal Ika (Unity in Diversity), Indonesia, President Jokowi said in a remarks at the Ceremony Commemorating the Founding of Pancasila, at the Field of Pancasila Building of the Ministry of Foreign Affais, Jakarta, on Thursday (1/6).

However, our diversity has been threatened by other ideologies and activities. The President mentioned that there are intolerant actions that promote ideologies contrary to Pancasila. Not to mention that those situation are compounded by the misuse of social media, the spreading false news, hate speech that are not in line with the culture of the country.

President Jokowi reminded all that we must learn from other countries experiences in which they have faced the radicalism, social conflict, terrorism, and civil war. However, the President added, we can prevent those situations by manifesting the Pancasila and the 1945 Constitution which were formulated in the Unitary State of the Republic of Indonesia and Bhinneka Tunggal Ika (Unity in Diversity). We can live in harmony and help each other for the progress of the country.

With Pancasila, Indonesia is a reference to the international society in creating a peace, fair, and prosper live amidst the global diversity, the President said.

Therefore, President Jokowi called on ulemas, clerics, priests, pastors, Hindu and Buddhist monks, educators, art workers, media professionals, the Governments, military and police, and all other elements of society to come together to safeguard Pancasila.

President Jokowi asserted that the Governments commitment to Pancasila is unquestioned. The President mentioned that there are many efforts that have been and continue to be made, such as the development of ethical and moral education, and various other programs that become an integral part of the manifestation of the values of Pancasila.

Also on that occasion, President Jokowi told that the Government has issued a Presidential Regulation Number 54 of 2017 on the Establishment of Presidential Working Unit for the Fostering of Pancasila.

The newly-established unit is representation of the President and all components of the nations at the strengthening of manifestation of the values of Pancasila as an integral part of the economic, social, political, and culture developments, President Jokowi said.

The Head of State also affirmed that there is no other choice but helping each other to realize the objective of the nation that is in line with Pancasila. There is no other choice, all Indonesian people should unite their hearts and thoughts, as well as give their time and efforts for the sake of unity and brotherhood.

There is no other choice, we must return to our identity as a civilized nations, that has the sense of mutual cooperation and tolerance. We must make Indonesia a fair, prosper, and dignified country in the international arena, the President firmly said.

For that reason, President Jokowi stressed on the importance to be aware of any kind of ideologies and movements that are contrary to Pancasila.

Concluding his remarks, President Jokowi encouraged all elements of the nations to be united in guarding the peace, unity, and brotherhood.

Let us be polite and respectful, let’s be tolerant and help each other, let’s work together for the progress of Indonesia, the President stated.