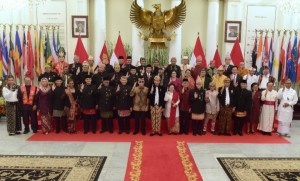 President Jokowi poses for a group photo after leading the Commemoration of the Birthday of Pancasila on 1 June 2019, at the Courtyard of Pancasila Building, the Ministry of Foreign Affairs, Saturday (1/6). (Photo by: PR/ Rahmat)

Pancasila (the Five Principles, the Indonesian State Ideology) is the guiding star for Indonesian people in our social, national, and political life, according to President Joko Jokowi Widodo.

It also serves as a fortress that protects us from dangerous ideologies, and home for all layers of society, President Jokowi said when leading a ceremony to commemorate the 2019 Pancasila Day, at the Courtyard of Pancasila Building, the Ministry of Foreign Affairs, Saturday (1/6).

Based on the history, as a large and diverse country, Indonesia has proven its ability to face difficult times, and more united in facing challenges.

During 74 years of the history of the Republic of Indonesia, we have learned to become a mature nation. Seventy four years of ups and downs but we are able to get through it and strengthen our unity, the President added.

The President went on to say that we have managed democratic process well from time to time. He added that all Indonesian people always uphold the Constitution and noble values of Pancasila as the guiding star.

Any challenge that disrupts national unity and the Pancasila should make us more mature as a country, in term of carrying out democracy, improving the national development, and maintaining the unity and harmony, the Head of State firmly said.

The one that guide us is the noble values contained in the Pancasila, namely faith, social justice, unity, and equity. We know that upholding those values is not easy since global challenges have been tougher and openness and competition are more fierce, President Jokowi said.

Technology development, particularly information technology also poses a great challenge because it can support the spreading of hoaxes, hate speeches, and slanders. Poverty and inequity also pose major challenges for us, he added.

Therefore, President Jokowi on that occasion called on the people to remain optimistic because the Government has developed infrastructures that unite the nation and succeeded in lowering poverty rate.

We have succeeded in reducing inequality and maintaining economic growth and employment opportunities in the midst of this volatile global economy,” he said.

Human resources development will also become our priority since a competent human resource which has noble values and upholds the values of Pancasila will contribute greatly to the countrys welfare as desired by our founding fathers.

Therefore, the Government expected all layers of society including ulema (Islamic leaders) and religious figures from schools, boarding schools, and universities, as well as humanists and experts to get involved in accelerating Indonesian human resources.

To conclude his speech, President Jokowi invites all people to seize the momentum of the Pancasila Day to reaffirm their commitments in practicing the noble values of Pancasila.

To be tolerant, live in harmony, help each other, fight against anti-Pancasila ideology, as well as against terrorism and separatism that could threaten the unity of our nation, Indonesia, President Jokowi concluded by saying, Happy Pancasila Day. We are lndonesia, We are Pancasila. (AIT/EN)