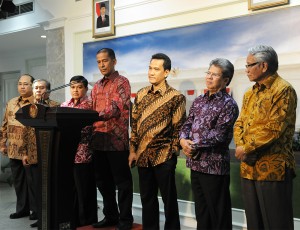 Chairman of Pansel of MK Judge, Saldi Isra accompanied by members of Pansel, giving a press conference after received by President Jokowi, in the office of President, on Monday (5/1)

After going through a series of selection stages, among others; ranging from the selection of interviews, searches a track record by the Corruption Eradication Commission (KPK) and the Center for Financial Transaction Reports and Analysis (PPATK), as well as medical tests at Army Hospital (RSPAD) Jakarta, the Selection Committee (Pansel) convey 2 (two) constitutional judge names to replace Hamdan Zoelva as Judge of the Constitutional Court (MK).

“We did not directly decide the two names, but through a discussion, whether the criteria required by the Constitutional Court (MK) today. Therefore, we are looking for on the basis of the needs and the three criteria that we set, “Saldi Isra said in a press statement after giving two names to the President Jokowi, at the Presidential Office, Jakarta, Monday (5/1).

Three criteria that defined, according Saldi Isra, are integrity, capability, and independence.

After Pansel of  MK Judge determines I Dewa Gede Palguna and Yuliandri as Judge candidates of Constitutional Court (MK), which were submitted to President Jokowi, then the expectations of other three candidates constitutional judges who participated on the second phase, namely: Imam Anshori Saleh, Aidul Fitriaciada Azhari, and Indra Perwira, finally vanished.