Papua Province to Get 10% Freeport Shares 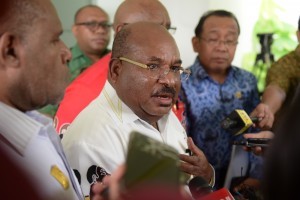 The President emphasized that we must be careful (on the shares divestment) for Papua Provincial Government and Mimika Regency, Lukas told reporters after attending the Limited Cabinet Meeting at the Presidential Office, Jakarta, Thursday (29/11).

President Jokowi also told Lukas to be careful lest other parties suddenly ask for shares.

Furthermore, Lukas expressed his gratitude to the Government for their good faith on the handover of 10 percent of PT Freeport Indonesia’s shares.

We believe the President has made every effort in fighting for the rights of the people of Papua, Lukas said.

According to Lukas, the President will oversee the handover process and he asked to complete the negotiation of the 51 percent share ownership by the end of December 2018.

Regarding the distribution of the 10 percent – shares, Lukas continued, Papua Provincial Government will receive 3 percent of the shares and Mimika Regency will receive 7 percent. (MAY/RAH/ES)