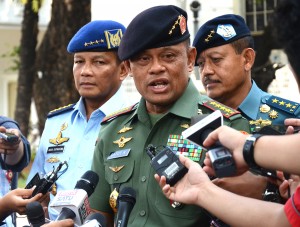 The peak event of the Indonesian National Defence Forces (TNI)’s 70th Anniversary on October 5 will be held at Indah Kiat Beach in Cilegon, Banten. At the event, TNI will accentuate the theme Indonesia as the Worlds Maritime Fulcrum by presenting sea and air battle demonstrations from the Indonesian Navy (TNI AL) and the Indonesian Air Force (TNI-AU).

We choose Cilegon because it is the closest area to Jakarta and we could hold the demontrations there. It means that TNI AU could release a shot into the air, so does TNI AL, TNI Commander Gen. Gatot Nurmantyo said after received by President Joko Widodo (Jokowi) at the Merdeka Palace, Jakarta, on Tuesday (22/9) afternoon.

The Commander and the Chief of Staff of the TNI invite all people to come to the peak event of the TNI’s 70th Anniversary, which will also become a Pesta Rakyat (the People’s Party).

He mentioned that President Joko Widodo has affirmed his willingness to act as the inspector of the ceremony at the event.

When the reporters asked regarding the differences between peak event of the TNI’s 70th Anniversary this year and last year, the TNI Commander answered that there will be the battle demonstrations, both naval and sea battles.

The battle is not about the primary weaponry defense system (Alutsista), but more on the battle itself. So, besides the parade, we will also have battle demonstrations, Gatot said.

The Commander of TNI invites all people who wants to know the grandeur of TNI AU and TNI AL to watch the show.

There will be 5,270 soldiers joining in. The latest alustista will be featured as well in the event, Gatot said firmly while refusing to mention the detail of the show at the peak event to make people curious and want to watch the event. (DID/AGG/ES) (RAS/MMB/YM–Naster/Sy)