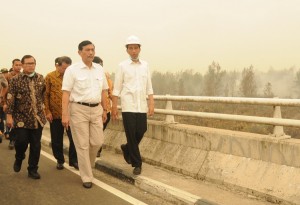 President Joko Jokowi Widodo said that hot spots in peatlands are like seasonal calamity and each year the problem reappears due to the bad management in landpeat.

Therefore, the President called for an emergency action to handle peatland fires.

I order the Environment and Forestry Ministry and Regional Government to oblige enterprises to build traditional reservoir for catching rainwater (embung) which could beneficial to rewetting the peatland, President Joko Widodo said via his facebook fanpage and personal account on twitter @jokowi on Saturday evening (26/9).

Through the water availability in the areas around peatland, the President added, when fire occurs, water pump machine shall immediately work to extinguish hot spots quickly.

In Central Kalimantan, I have seen real efforts to build water reservoir (embung), the President said.

President Joko Widodo also reiterated his commitment to prosecute people who set the fire that give us hard time.

However, the President reminded all that his commitment shall never run without supports from all parties: Regional Government, private sector and the people.

The President mentioned, peatland is flammable area that makes it hard to extinguish fires in peatland area.

When I was doing nothing for five minutes, the fire suddenly got bigger. The key is on water reservoir (embung). Establish canals immediately and it has to be a massive one, President Joko Widodo said as was quoted by Presidential communication team member, Ari Dwipayana, in a press conference on Thursday (24/9).

President Joko Widodo has been able to ask the preparation of Regional Government and Regencys budgets to build the water reservoir (embung). It turned out that there are no budget in government, province, and regency to build water reservoirs (embung).

I have ordered the National Disaster Agency for Management (BNPB), Ministry of Environment and Forestry to work on the budgets as soon as possible, the President added.

The budget used in the canal construction are from BNPB and the Ministry of Environment and Forestry.

President Joko Widodo also instructed the National Defence Forces (TNI) that has quick mobility to take part in the construction and TNI said that they are ready.

President Joko Widodo also asked to disseminate to the people regarding the impacts of peatland fires, so that they will not clean the land by firing it.

A massive dissemination is needed so that they will not burn the land, the President said.

When monitoring, many officers of TNI and the National Police (Polri) were seen working to extinguish fires. Several units of fire engines and water canon from police department were also there.