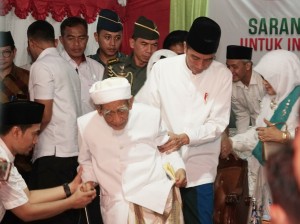 President Joko Jokowi Widodo expressed his concern over development of social media in Indonesia which is full of slanders, insults, hate speeches, and reproaches.

The Head of State, who is accompanied by First Lady Ibu Iriana Joko Widodo on that occasion, emphasized that such actions do not represent political ethics and morality.

It does not abide by our political manners. There is a manner or practice in practicing politics, President Jokowi said at the Sarangs Mass Dzikir (chants in praise of God) for a Developed Indonesia, at Al Anwar Sarang Islamic Boarding School, Rembang, Central Java, on Friday (1/2).

Once again, it is not Indonesian ethics nor manners, it is also not the values of Islam and civic virtue, the President added.

Previously on his remarks, President Jokowi reminded people that Indonesia is a big country facing several big challenges. He added that our population is now 260 million, 149 million live in Java, and the remaining live in more than 17 thousand islands.

Indonesia, the President added, is blessed by God with diversity and plurality. Indonesia has diverse ethic groups, religions, traditions, customs, and local languages.

On that occasion, President Jokowi also reminded the people that election be it regional, legislative, and presidential elections are an quinquennial event. Thus, the President asked all to look for achievement, experiences, ideas, and programs of regional head candidates before casting a vote.

No need to slander, insult, reproach each other, the President fimly said.