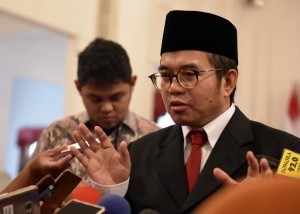 Yudi Latief responds to reporters questions after he was inaugurated as the Head of Presidential Working Unit for the Implementation of the State Ideology of Pancasila (UKP-PIP) on Wednesday (7/6), at the State Palace, Jakarta

President Joko Jokowi Widodo on Wednesday (7/6), at the State Palace, Jakarta, inaugurated activist and intellectual Yudi Latief (53) as the Head of Presidential Working Unit for the Implementation of the State Ideology of Pancasila (UKP-PIP). On that occasion, the President also inaugurated  9 (nine) national figures as the advisors of UKP-PIP.

After the inauguration, Yudi told the reporters that the establishment of UKP-PIP under Presidential Regulation Number 54 of 2017 is a momentum to strengthen the nationalism, because Pancasila is a tool to unify the nation. Thus, Pancasila will not rip apart the unity, yet it reattaches the loose knots. A broomstick can easily be scattered if it is not tied, but it will be sturdy because its strands are tightly bounded. For Indonesia, the bound is Pancasila, Yudi said.

According to Yudi, over the past few days, a spirit to commemorate Pancasila Week has sparked in the society. This momentum should be carried on. In fact, the Week can be developed into Pancasila Month. In the future, the commemoration will not take place in a week, but a month. It is referred to the founding day of Pancasila on 1 June, then the ideology was improved on 2 June, and it was enacted when the 1945 Constitution was stipulated on 18 August. I think people must be enlighted that Pancasila is not formulated at one time, but it was a continuing process from 1 June to 18 August, Yudi added.

For that reason, Yudi added that the upcoming months should be a moment to start the movement in practicing Pancasila. Thus, it should not only be a ceremony but a moment when all people and parties are practicing the value of Pancasila in their everyday life. We can imagine that moment, when activists from various faiths come together, when big businessmen meet with small businessmen to share their ideas, share experiences to handle any projects, and work together so that the problems including social inequality can be solved, Yudi said.

In the future, UKP-PIP will serve as a facilitator. The activists from different communities will be asked to be more active. Thus, the communities, religious figures, humanists, filmmakers, journalists, and leaders of customary law (adat) will be brought together in a connectivity so that they can work together and be responsible in guarding Pancasila. It’s like Bung Karno says, Pancasila sources from the communities. Thus, if Indonesia faces problems, it means the country asks the communities to take part in guarding these values, Yudi said.

Regarding the needs to revive Pancasila class at school, Yudi asserted that the authority lies on the related ministries, such as Ministry of Education and Culture, and Ministry of Research, Technology, and Higher Education.

What UKP-PIP can do is to assist the related ministries when Pancasila class is teached once again as an explicit teaching by ensuring that the teaching materials, system, and methodology are more powerful, interesting, and is in line with the development of todays society. (FID/RAH/ES) (RA/MMB/YM/Naster)