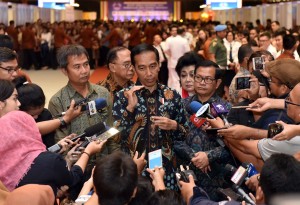 President Joko Jokowi Widodo responded to the decision made during the plenary meeting of the House of Representatives (DPR-RI) that passed Government Regulation in lieu of Law Number 2 of 2017 on Mass Organization into law on Tuesday (24/10).

According to the President, the Perppu was passed through a voting process in which 314 out of 445 lawmakers in attendance agreed to pass the Perppu into law.

It is clear that the majority of lawmakers agree to pass the Perppu into law, said President Jokowi during the opening ceremony of the 2017 National Working Meeting (Rakernas) of the Indonesian Buddhists Association (Walubi) in JIExpoKemayoran, Jakarta, Thursday (26/10).

President Jokowi added that the Perppu was formulated with the aim of maintaining unity, diversity and the state ideology Pancasila as well as the Unitary State of the Republic of Indonesia (NKRI).

This Perppu concerns the states existence in the future so nobody is dare to change our ideology Pancasila. So the goal is clear, the President said.

However, President Jokowi said that the Government welcomed any revisions, improvements or additions to the articles in the law.

The Houses approval of the Perppu shows its clear support for the law. If revisions are needed, please include them in the National Legislation Program (Prolegnas), the President said.

Previously, Chairperson of Walubi Murdaya Poo in her report also touched on the issue of the Perppu.

We would like to congratulate on the passing of the Perppu into law. This is a big momentum that means a lot for the Indonesian people, Murdaya said.

Walubi, she added, highly appreciates the move made by President Jokowi who is so brave and assertive to issue the Perppu, which has been passed into law.

Our President, although he seems to be so polite and gentle, he is actually strong, brave and very firm. Let us be grateful and pray so that Indonesia that he leads can be safe and reach success and Indonesia can be advanced and bring prosperity for the people, Murdaya said.

Also attending the event were Cabinet Secretary Pramono Anung, members of the Presidential Advisory Board (Wantimpres), Chairman of the Rembug Nasional, Chief of the Jakarta Military Commandeer, Chief of the Jakarta Regional Police, and Ambassadors of Friendly Countries. (RMI/JAY/ES) (EP/YM/Naster)