Pertamina Cancel the Price Increase of Pertamax, Pertamax Plus and Pertamina Dex 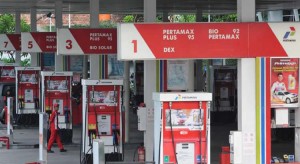 Pertamina Cancel the Price Increase of Pertamax, Pertamax Plus and Pertamina Dex

PT Pertamina (Persero) canceled a planned price increase, fuel oil (BBM) type of Pertamax, Pertamax Plus and Pertamina Dex, which should put into effect from Friday (15/5) this.

Vice President Corporate Communications of Pertamina Wianda Pusponegoro in a press release on Thursday (14/5) night confirmed that, there was no increase in the price of all types of fuel marketed by Pertamina. The assertion as a clarification of the company related to the confusion that is circulating in the community related to the price of fuel (BBM).

He mentions, since the enactment of Presidential Decree No. 191 of 2014, the determination of fuel prices regulated by the government, in which a certain fuel types, namely Diesel and Kerosene, as well as the assignment BBM, the Premium for areas outside of Java, Madura, Bali stipulated by the government. “Meanwhile, the common BBM, in this case Premium marketed in Java, Madura and Bali are set by the business entity,” he said.

Special Fuel which consists of Pertamax, Pertamax Plus, Pertamax Racing, Pertamina Dex, further Wianda, is a commercial fuel product, that was the full authority of the business entity, that is Pertamina. However, Wianda asserted that for the Special Fuel also will not have price changes per May 15, 2015.

“Until now, both the government and Pertamina in accordance with the authority does not make changes to prices of Solar/Biosolar subsidized and Premium. Likewise, special fuel prices unchanged for the period of May 15, 2015. We hope that this information can be received well by the public,” Wianda said.

Marketing Director of Pertamina, Bambang Ahmad confirmed that the increase will be due to the influence of the strengthening the dollar exchange rate.

“It is true (there is an increase of Pertamax). Because of the MOPS high rise and the dollar has been above Rp 13,000 per US $ 1”, Bambang Ahmad said as quoted by some media, Thursday (14/5). (Humas Pertamina/ES)