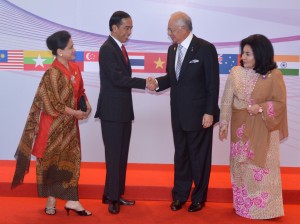 In his opening speech, Prime Minister Najib mentioned the act of violence and terrorism in several countries, including what just happened in France and Mali, that killed hundreds of people.

According to Prime Minister Najib, it needs a new solution to solve the problem of extremism and terrorism in the world. He later mentioned that military force alone is not enough to defeat the person who deliberately provoking war, chaos and death, as well as creating sorrow and despair.

This is an ideology propagated by the extremists, which causing violences, PM Najib said while adding that we could not forget their ideology is solely a lie.

PM Najib assured that the ideology of extremism and terrorism is not the value of Islam, and Malaysia will stand in the front line to combat a new crime which insulting Islam.

Terrorim must be faced with the full force of law, PM Najib said while asserting ASEAN mourned the deadly attack in France, Mali and other countries.

On the other part of his speech, Prime Minister of Malaysia Datuk Seri Najib Tun Razak asserted that ASEAN needs to cooperate to find solutions for several issues, such as haze, catastrophe and migration crisis. He later mentioned there must be a special line for ASEAN citizens in every international seaports, roads and airports in ASEAN areas.

Regarding South China Sea, PM Najib said that ASEAN called on all parties to restrain themselves from taking actions that will worsen the situation or increase the tension.