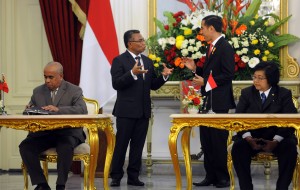 President Jokowi and PM of East Timor Rui de Araujo talked, when witnessing the signing of cooperation between the two countries, at the State Palace, Jakarta, Wednesday (26/8)

“I noted the determination of both countries to strengthen bilateral relations. In a business relationship noted a positive development, with a focus on economic cooperation,” Prime Minister Rui Maria de Araujo said in a joint press conference with President Jokowi, at the Presidential Palace, Jakata, Wednesday (26/8) afternoon.

Prime Minister Rui Maria expressed his appreciation of his reign to Indonesia for the continuing determination to improve the partnership and technical assistance,   especially in the areas of fisheries, agriculture, forestry, trade, and infrastructure, which is in line with the development agenda of Timor Leste.

Previously, President Joko Widodo (Jokowi) said that the bilateral talks between the two countries have agreed on the issue of borders, both land and maritime borders.

“There are two points of border land that has not been completed, and earlier we have agreed to be completed by the end of this year,” President Jokowi said in a press statement together with Prime Minister of East Timor Rui Maria de Araujo, at the State Palace, Jakarta, Wednesday (26 / 8).

Then the maritime border, President Jokowi said, both countries have agreed will soon start, and will start from the northern part of the sea first, and then later turned to the sea in the South.

“I think it will be resolved quickly,” President Jokowi said.

The second issue, relating to trade and investment, according to the President Jokowi, Indonesia remains committed to participate in the construction of infrastructure, and investments in East Timor. (DND/RAH/ES)