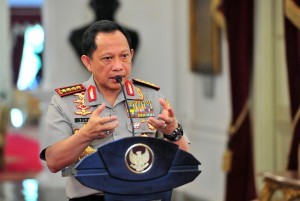 The main root of armed violence in Papua is welfare issue, according to Chief of the Indonesian National Police (Kapolri) General Tito Karnavian.

“West Papua and Manokwari used to be the main base for the armed groups but currently there are no more (armed groups) in those areas due to the (economic) development,” Tito said during a press conference at the Merdeka Palace, Jakarta, Wednesday (5/12).

Tito went on to say that President Joko Jokowi Widodo has a very strong commitment to the development of the areas, including the acceleration of the construction of Trans Papua. “The President instructs Minister of Public Works and Public Housing to work with all stakeholders, including the Corps of Engineers of the Indonesian National Defense Forces (TNI) to build the Trans Papua,” Tito said.

Tito added that the armed group killed Trans Papua workers in District of Yigi, Nduga, to show their existence. The armed group chose 1 December to do their action, since they considered the date as the Independence Day, he said.

The armed group regularly attacks the TNI, the Polri, and migrants and committed violence during the last regional election (Pilkada) and after the Government deployed the TNI and the Polri, the group moved to Nduga, Tito said.

Tito went on to say that the Government has re-deployed the joint force of the TNI and the Polri to defeat the armed group. “We are very confident that very soon we will be able to control security despite the geographical barriers, Tito said, adding that the police has coordinated with Ministry of Public Works and Public housing regarding the security of the construction of Trans Papua. (FID/JAY/ES)