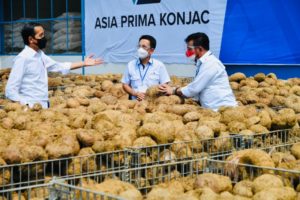 “This afternoon, I come to Madiun Regency to visit konjac processing factory owned by PT Asia Prima and in my view, the processing in this factory gives good added value, especially for farmers,” President Jokowi said at the location, Thursday (19/08).

According to the President, one hectare of konjac plant can produce 15-20 tons of konjac roots per growing season. “It can reach Rp40 million in 8 months. The value is high and the market is still wide open (for us),” he added.

President Jokowi further said that konjac will be a substitute for staple food, for example rice, in the future since it is low in calories, carbs, and sugar.

On the occasion, the President instructed Minister of Agriculture Syahrul Yasin Limpo to seriously develop konjac as a new commodity and export it in form of finished goods, such as konjac flour and rice, instead of as raw materials.

During the visit, President Jokowi also attended a groundbreaking ceremony of expansion of the factory and inspected the processing of konjac from raw materials to semi-finished goods. He also had a dialogue with several representatives of konjac farmers.

For the record, konjac or Amorphophallus muelleri Blume is a type of tuber plant that contains glucomannan or sugar in complex form.

Konjac root is usually processed into rice, shirataki noodles. Konjac can be used also as a thickening agent in cake, bread, ice cream, candy, jelly, jam and syrup making. In addition, it is used as well in cosmetic industry. (FID/AIT/TMJ) (GWH/MMB)