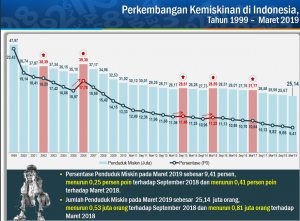 The number of poor people in Indonesia as of March 2019 is recorded at 25.14 million people, or decreases by 530,000 people compared to that in September last year, the Central Statistics Agency (BPS) has reported.

It added that compared to the same period last year, the figure drops by 800,000 people.

Poverty percentage in urban areas drops from 6.89 percent to 6.69 percent, while in rural areas the figure drops from 13.10 percent to 12.85 percent, he added.

Suhariyanto noted that national poverty line in March 2019 is Rp425,250 per capita/month, adding that the number increases by 3.55 percent and 5.99 percent compared to September 2018 and March 2018 respectively. He added that poverty line per household is counted based on minimum money that must be spent by households to meet their needs.

Suhariyanto further said that prices of staple food play a great role in determining poverty rate both in urban and rural areas, which is at 20.59 percent and 25.97 percent respectively, adding that rice price is the biggest factor, followed by cigarette price and chicken egg price. (Humas BPS/ES)