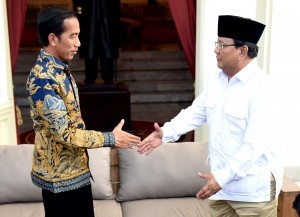 This time, I came and thanked the President for inviting me for lunch, with grilled fish as the menu. We ate nasi goreng (fried rice) during our meeting in Hambalang, and today we ate grilled fish, Prabowo told the reporters after finishing the discussion with President Jokowi.

Prabowo explained that the visit, which was filled by close, warm, and friendship atmosphere is part of our culture. I come to respect the President, and it turns out that we have the same values to uphold. Thus, I feel obligated to help the Government if it is needed. I am ready to help anytime and anywhere, Prabowo said.

Regarding the discussion with his rival at the 2014 Presidential Election, Prabowo said that he gave several inputs that well-received by the President. We share same views on several issues, and I think it will contribute to the nations integrity and unity. I have the same opinion with President Jokowi that Indonesia will always be a target of great powers in the world, Prabowo added.

According to Prabowo, each leader in Indonesia obligates to maintain the integrity and unity, as well as conducive atmosphere. Any divergence and conflict shall be settled in conducive, peaceful, and friendly atmospheres. Issues between family can definetely be settled, right? Prabowo said.

Prabowo went on to say that in the meeting, he conveyed his appreciation to the President relating to the current issues. I think we can get through processes and challenges together with composure and coolness, Prabowo said.

The point is, Prabowo added, that we want to show such culture to the young generation. Two leaders, particularly those who once rivals, now friends.

Thus, it is normal to have different political views. It must not grow into an issue of disintegration and we were determined to it, Prabowo explained.

Finally, we want to realize those atmosphere, Prabowo concluded.