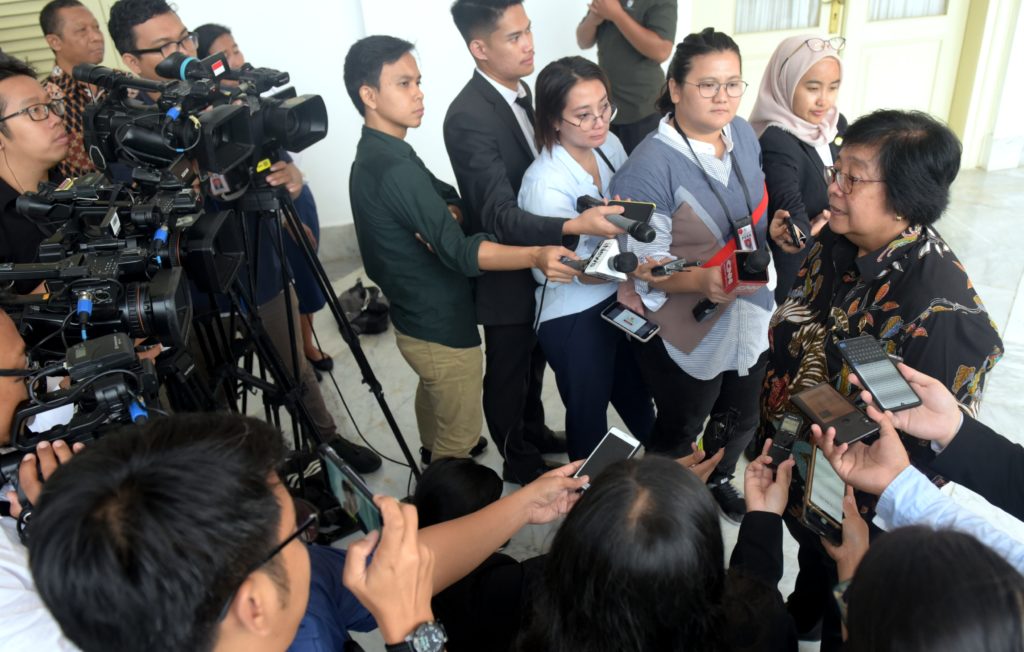 Minister of Environment and Forestry Siti Nurbaya responds to reporters’ questions after a limited meeting, at the Bogor Presidential Palace, West Java, Tuesday (27/8). (photo by: Rahmat/PR)

Ministry of the Environment and Forestry has announced it will conduct environmental studies on the new capital.

As previously reported, President Joko “Jokowi” Widodo on Monday (26/8) announced that the Government would relocate the country’s capital from Jakarta to part of North Penajam Paser regency and part of Kutai Kertanegara regency in East Kalimantan province.

“We had a meeting last night. I ordered director generals (at the Ministry) to have a discussion with the Indonesian Forum for the Environment (Walhi) and a number or environmentalists. And we will also start preparing the frames of reference,” Minister of the Environment and Forestry Siti Nurbaya said after a limited meeting  at the Bogor Presidential Palace, West Java, Tuesday (27/8).

The Minister expressed hope that the studies can be completed in two months, adding that the Ministry has also carried out an observation at Bukit Soeharto Conservation Forest on the ground.

“Mangrove ecosystem there is still intact and healthy. Nevertheless, I think we can preserve it better with better management,” she said.

President Jokowi has also ordered the Minister to rehabilitate the conservation areas and forests in the development of new capital city.

The Minister added that the Government will also rehabilitate abandoned mining sites and open-pit mining sites in the province, totaling 1,400 pits.

“Considering landforms in East Kalimantan province which are categorized as fluvial land that can store water, water contained in an open pit can be used after several treatments,” the Minister said.

Regarding groundwater sources, Siti stated that the Ministry will also conduct morphological and geological studies on the needs of water.

“Although some part of land allocated for the new capital is production forest, it won’t be a problem for the development because the Government Regulation has mandated Ministry of the Environment and Forestry to manage the allocation and use of production forest,” the Minister said, adding that the Ministry will also make a decision about land compensation later on. (HIM/RAH/ES)