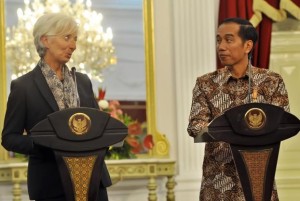 Commenting on the meeting, President Widodo said: We discussed global economic situation has been uncertain these days. We did not discuss loans, the President said, adding that Lagarde considered that Indonesia has a good preparation in facing global economic uncertainties.

During the meeting, President Widodo and Lagarde also discussed the 2018 Annual International Monetary Fund and the World Bank (WB) meetings that will be held in Indonesia.

I extended my greatest gratitude because in 2018, Indonesia will host the annual IMF-WB meetings, the President said. According to the President, it shows that IMF puts a trust in Indonesia.

They have a trust in us to host the meetings, the President added.

In the meantime, Lagarde thanked Indonesians for the hospitality shown during her visit to Indonesia. She also praised programs implemented in Indonesia, including their serious implementation.

Meanwhile, newly-appointed Presidential Chief of Staff Teten Masduki in his press release said that the meeting between President Widodo and Lagarde discussed global economic situation in general and how Indonesia as an emerging market responded to global economic slowdown.

They also discussed mid-term economic prospect amidst economic slowdown, including the US economic policies that will certainly affect global economic condition, especially economy is Asia, as well as the devaluation of Chinas Yuan, he added.

Teten went on to say that during the meeting President Widodo also showed economic transformation that has been done in Indonesia since 1998, including a number of strategic steps that the Government had made such as slashing fuel subsidies significantly, which has saved Rp. 207 trillion for infrastructure development and social programs to help the underprivileged.

The IMF gives its appreciation to the development of infrastructures and human resources that President Jokowi has done very fast, Teten said.

Teten further said that during her visit to Jakarta, Lagarde was also scheduled to attend an international conference on The Future of Asias Finance on 1-2 September hosted by Bank Indonesia and the IMF. (ES/Humas)/EP/YM/Naster)/Sy.