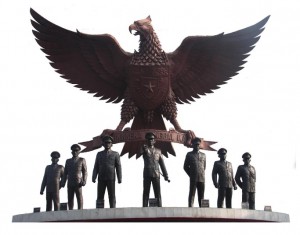 President Susilo Bambang Yudhoyono (SBY) is scheduled to lead the Commemoration Ceremony of Pancasila (Five-Pillars) Sanctity Day at Pancasila Sakti Monument complex, Lubang Buaya, East Jakarta, on Wednesday (1/10) at 08.00 am. This is the last time or the 10th that President SBY will act as ceremony inspector of Commemoration of Pancasila Sanctity Day, which has been going on since 1967, that stipulated by General Suharto as acting President.

Minister of Education and Culture, Mohammad Nuh, as chairman of the committee said, the theme of the Commemoration Ceremony of Pancasila Sanctity Day this time was: ‘Strengthening the Values of Pancasila To Improve the Quality of Democracy’. He hopes the ceremony held in a simple, solemn, and orderly.

Minister of Education and Culture also requested that the ministries, government agencies, the Attorney General, the Ministry of Non-Government Institutions, and Representative of the Republic of Indonesia in Foreign Affairs, also held the commemoration ceremony of Pancasila Sanctity Day.
Leaders the ceremony handed over to the head the ministry, State Agency, the Attorney General, the Government Institutions of Non Ministry, Bank Indonesia and/or the official appointed by Minister of State Secretary circular.

In connection with the ceremony at the Pancasila Sakti Monument, Lubang Buaya, Jakarta, according to the Minister of Education and Culture, Speaker of the House of Representatives, Marzuki Alie, is scheduled to read the pledge that affirms the determination to maintain and practice the values of Pancasila as a source of strength rally togetherness to fight and uphold truth and justice for the sake of the integrity of the Unitary State of Republic of Indonesia.

“The provisions of the existing solemnization, also applies in the organization of the ceremony at the campuses and schools,” wrote the Minister of Education and Culture in that letter. (WID/ES)