President and Vice-President Breaking the Fast with Speaker of MPR 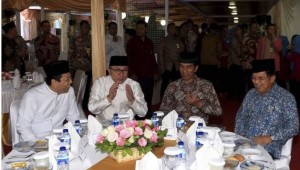 President Joko Widodo (Jokowi) and Vice President M. Jusuf Kalla (JK) attended the breaking fast together with the leaders of MPR, DPR, DPD and leaders of political parties at the residence of the Chairman of MPR Zulkifli Hasan in Complex Widya Chandra, South Jakarta, on Monday (22 / 6).

President and Vice President arrived simultaneously in a series at 17:10 pm. Also, present the ministers from the Cabinet Work, such as Minister of Religious Affairs Lukman Hakim Saifuddin, Minister of Industry Saleh Hussein, Minister of Tourism Arief Yahya, as well as the Coordinating Minister for Human Development and Culture (PMK) Puan Maharani.

In addition also attended Minister of of Public Works and Public Housing (PUPR) Basuki Hadimuljono, Minister of Agricultural and Spatial Ferry Mursyidan Baldan, as well as the Minister of Youth and Sports.

Compliment the Speaker of MPR

Speaker of MPR Zulkifli Hasan said in his speech, the executive will be successful in running the government if it is able to maintain good relations with other state institutions.

“Allhamdulillah on this day the chairman of the state institutions to come,” he said.

Zulkifli was pleased that the President and Vice President this time has a strong sense to Hospitality.  (Humas/ES)