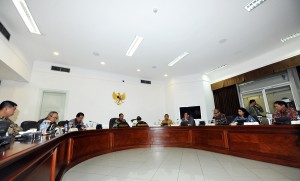 President Jokowi lead a limited cabinet meeting regarding the port, on Tuesday (10/2).

“We want to talk details regarding the sea transport, which is of course linked to the possibilities related with highway and railway,” President Jokowi said in the introductory of the meeting.

President Jokowi wants everything to be reckoned with well and carefully so that all transport can be connected. “Do not get the wrong decision, because it concerns to our economy in the long term,” he said.

If the transport can integrate and connected, President Jokowi expects to be able transport the logistics to all corners of the region in Indonesia.

“I believe if the infrastructure, whether by land, sea or air we started and fix all, then the transportation costs are cheap, distribution logistics to be cheap, and the prices related to basic needs also being dropped off significantly,” he said.

To the ministers, the President asked to convey the matters associated with construction of ports, and the possibilities of layout and priorities of the development.