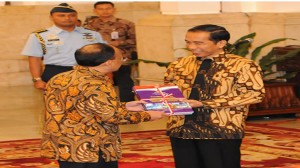 President Joko Widodo (Jokowi) says has instructed Minister of Maritime and Fishery Susi Pudjiastuti to sink foreign ships that illegally fishing in Indonesian territory. It is a sanction believe to cause deterrent effect on them, in order to save our marine resources.

Sink their vessel, not just put them in detention, or our marine resources would finished, says President Jokowi while giving a briefing to participants of The 51th and 52nd Regular Education Program Of National Security Agency (Lemhanas) 2014, in Jakarta on Wednesday (18/11). A day before, Monday (17/11), Minister Susi Pudjiastuti reports to President Jokowi after her field trips to have detained three foreign ships that steal our fish in the waters of Berau in East Kalimantan.