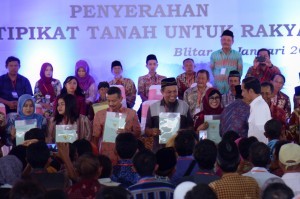 President Joko Jokowi requested the Indonesian people to prevent the spreading of hoaxes and slanders.

He made the statement in respond to a hoax that widely spread among public claiming that there were 7 containers from China contained 10 million voted ballots of the 2019 Presidential and Vice President Elections for candidate number 01 (Joko Widodo-Maruf Amin).

It is completely hoax. Let us not spread that kind of hoaxes and false news, President Jokowi said to reporters after handing over 2,500 land certificates to the residents in Blitar Regency, East Java, Thursday (3/1).

Chairman of the General Election Commission (KPU) Arief Budiman has also confirmed that the news is hoax.

The President reminded that Indonesia will soon hold a Presidential Election in the next three months, thus he asked everyone to remain calm and maintain peace ahead of the election.

If something like this goes on, it can bring negative effects to the public, the President concluded. (RSF / UN / OJI / RAH / ES)